Glasgow Accies have accepted an invitation from Berwick CC to the Anglo Scottish Sixes on Sunday 26th August.

The eight-team event features four teams from England (Berwick, Tillside, Ryton and Alnwick) alongside four from Scotland (Kelso, Gala, Strathearn and ourselves).

The bar will be open on Thursday from 1pm till 2pm and from 7pm till 8pm.

Training will be on tonight as long as its not raining. The bowlers run up in the nets are saturated, but the batting end is dry enough for some skill work. We can also use the grass beside the nets for fielding. Hope to see you there.

After yet another heavy downpour this morning New Anniesland is under water! As a result tomorrow's U23 European Championship match between Netherlands and Ireland has been cancelled. Cricket Scotland is hoping that Glenpark, Greenock might be able to stage the match instead if the rains pass by.

The match on Thursday between Scotland U17's and XL Club is under close review but is unlikely to take place.

To add further misery it seems that the XL Club Festival planned for next Monday and Tuesday [9th and 10th July] has been aborted because the team from North East England has had to withdraw due to the flooding in that area. Both these dates have now been erased from the calendar.

My thanks go to those members that offered their services for tomorrow's match and I am just sorry that I now have no need of them.

Just in case anyone in the teams is reading this please note that tonight's U18 and U13 matches have both been washed out by the continuing monsoons.

Here we are in the middle of June and I thought id check out hom the lads are performing and I must say that im very disappointed with whoever is running the show over there. The stats indicate that Daniel Scott has scored 49 runs from 9 innings and Ash Ringin has scored 126 runs at 25.80. Is this a mistake? Do I need to stop drinking before I read cricket statistics?

The other thing that concerned me is that the Accies have 10 players averaging 9 or less. I have attached a copy of the sign that must greet all incoming batsmen onto the centre wicket(see attachment). Also I see that Andrew Smith has 5 innings with (0) not outs and a grand total of 11 runs. Very ordinary effort that and you would think he could fluke one not out&hellipfrom time to time&hellip!!! Pull the finger out Smithy. 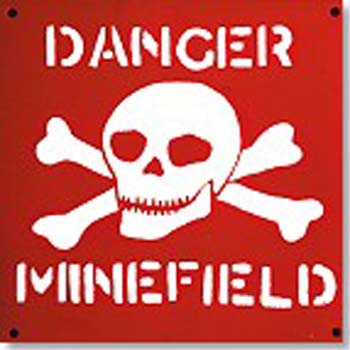 The other interesting stat was the form of Euan Sheridan. A strike rate of 13.20 but an economy rate of 6.45. On these stats do we assume that most wickets are batsman caught out on the boundary !!!! Sounds like you wouldn't want to be the close in fielder if the "E" man has the cherry and I would say passers by would be on high alert. Pitch it up for gods sake E man.

There is also a character that has best bowling of 0/17 - Charles Hollingworth. 132 deliveries without a wicket. At least Scotty has bragging rights in this contest as his best figures are 0/10!!! I will watch for developments here. Sound the Holl is a part timer but suggest on this form he wouldnt be called on too often!!!

Anyway, our other lad Les Sandwith is over in her majestys town of Ashover. I tried to access the site but you have to be a member - although the header showed the following results &hellip

That's more abandonments than conscriptees in the new iraqi army. On this basis Les you would be having a very nice time of it cobber. Don't know what your averaging but I reckon it might be more than Scotty!!! If anything has abondoned its Scotty's form.

You may well be disappointed with whoever is running the show over here cricketing wise but I can guarantee you that you will see a huge improvement in both Dan and Ash's skills when they return to your care. Ash has recently moved into same flat as Dan and they have been training on a strict regime ever since.

Unfortunately I am not referring to cricket here. However, should your club be entering a playstation 2 competition in the near future, you have two players with all round abilities on a wide range of games. Additionally, the lack of fresh air may cause them significant health problems in later life along with repetitive strain injuries in their thumbs. A small price to pay for hitting a hole in one at St Andrews (Ash's proudest achievement since arriving in Scotland)!

In the current climate Smithy is in form. We will however apologise for his outrageous choice of shirts. As you will see from a gallery from the end of last season his taste does leave some room for improvement. Perhaps most worryingly his boy of 1 year old has been seen sporting similar garments. This is something we are attempting to rectify as a matter of urgency.

You are 100% correct with your assessment of Shez's figures. If they are not caught on the boundary then they are sliced in the air attempting to hit the ball to Edinburgh.

Once more the reason for this can be traced back to your country. Not only have you ruined Dan's batting after we worked so hard on it you have also ruined Shez's bowling. He was fine until he spent the winter in Aus. You have broken him, and we will be seeking compensation in due course.

The weather here has been rank so your boys have been unable to improve on their averages. Ash is leaving us to go to America in a couple of weeks so I think you should have a word with this boy about his commitment. What's with arranging holidays during the cricket season?