Cricket section member Alex Dowers poses in front of the Atomium in Brussels at the end of his 300 mile four day cycle which also took in London and Amsterdam.

Alex says the weather was very kind, especially the following wind on day one, and wishes to thank all those who have sponsored him to raise funds for the Young People's Unit, Dudhope House, Dundee. 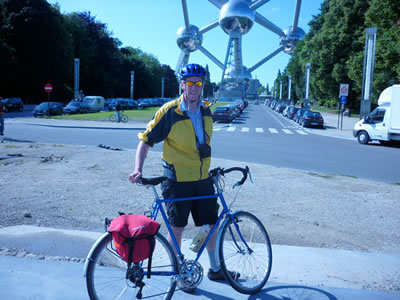 The Glasgow Academy is running coaching courses during the Summer holidays for any young and enthusiastic cricketer. The courses will be organised and delivered by Mr Vedam Hariharan who is the cricket professional with the Academy during the summer and The Head coach at The Australian Sports Gateway’s Cricket Academy in Brisbane.

I am advised that, in spite of today's rain, nets are ON tonight at Accies.

Accies 1st XI, with only four members of Saturday's league side present, travelled to Irvine yesterday and came back with a three wicket win having chased down an Irvine total of 205.  http://www.glasgowaccies.cc/teams/1xi/2009/fixtures/jun07_irvine_glasgow_accies

It seems that skipper Abhay Andar has found his miserly bowling touch again assisted by Messrs Kelso and Zai all of whom claimed two Irvine scalps [not a pretty sight at the best of times] whilst Ken Austin bagged a half-ton [plus 4 catches behing the stumps] assisted by Tanvir Singh and Himansu Mishra.

They now travel away to meet Strathmore on a date to be decided in the quarter final round.  Watch this space.

Posted on by Colin Dawson

It can't be true?  But it is!  A 143 run opening partnership between Matthew Lewis [73*] and Chris Allen [58] secured a high scoring draw for Windyedge down at Gatehouse of Fleet on Saturday - see scorecard http://www.glasgowaccies.cc/teams/4xi/2009/fixtures/jun06_gatehouse_of_fleet_windyedge.  By my calculations that's 16 points to Gatehouse and a very hard earned 9 points for Windyedge.  Who says there's no place for the draw in the lower divisions?  Well done lads.

It's easy not to have noticed unless, like me, you religiously check all the website team scores - Randy certainly didn't employ the Anniesland town crier for his hat-trick for the Sunday Dev XI last weekend against Sannox.  Perhaps it's the salt air that did it but with figures of 5 balls bowled, 3 wickets for 0 runs [the first 2 balls must have been boring!] he promptly ended Sannox's innings and ensured an early return for the ferry trip back to the mainland. A repeat against Hillhead would be more than welcome.

Congrats Randy - an acceptance speech at the AGM in September is expected.