Posted on Friday 25th May 2007 by Fraser Murray

With only the 1XI have a game tomorrow we've arranged to use the school ground for an intra-club practice game.

Posted on Thursday 17th May 2007 by Fraser Murray

The game's off tonight and will be replayed next Thursday (24th May).

The outfield's ok and there's food to be eaten afterwards, so we'll have a practice session instead.

Posted on Wednesday 16th May 2007 by Fraser Murray

The food's already there, and the bar needs to be open (Disclosure Scotland form signing), so we're going for a "turn-up and see how everyone feels about it" policy.

Posted on Thursday 10th May 2007 by Fraser Murray

You have a couple of our young players over there (I'm from their Australian Club) so make sure that you ensure they only drink in the finest local establishments and that they don't drink too much of the English beer as its crap. Perhaps get them onto HARP as that is a mighty fine drop.

Ash Ringin has a problem with his drinking as he has a liking for Vodka drinks which is considered most unsavoury over here. They should be restricted to the girls. You should be teaching him to drink beer in Pints and he also needs to have a hair cut. Fast bowlers aren't meant to look friendly and you need to teach him to swear more at the batsman.

Scotty is a good player and he does drink enjoy a beer so I think you will have less trouble with him. We have trouble getting him to drink a dozen cans after training with the rest of us so you could try and change that.

By the way, we are looking to start up a womens side so could you ask them to send over 11 chicks to get us underway and they can all stay at my place. Accommodation is no problem.

Let me know if any queries.

We would like to take this opportunity to assure both you and your club that no E*glish beer will be consumed, at any time, by Dan or Ash, or anyone else at our fine club for that matter. We have very high standards here and will be sticking to fine Scottish Lager or Irish Cider (the bar still hasn't realised it's selling it dirt cheap compared to anywhere else in Glasgow). 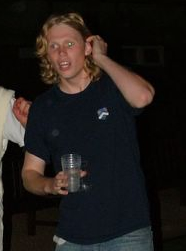 Unfortunately we have already discovered that Ash has a serious problem with his drinking habits. I am sorry to report that he has discovered at least one club which sells vodka and coke for £1. On a lighter note, I can report that measures will be taken to give him a man's haircut. He is however second in the queue when we hire our industrial shears, as the photo on the right will justify. This fella has spent some time in Australia so I think the blame for this clearly lies at your country's feet. It is unclear if current mop of hair will be accepted when he starts his new job this Thursday at Jellyhill.

What have you done with our Dan??? We sent you a player in fine form with an average of over 60 and he is currently on the receiving end of many peoples anger who have selected him in their 2007 Fantasy Team (see website for further details). Many have spent a whopping £1.75 selecting Dan and he is so far returning negative points and averaging 5 with the bat. To be fair to the man he clearly doesn't enjoy the cold and was seen wearing his batting gloves for extra warmth yesterday. He also bowled - well desperate times call for desperate measures. 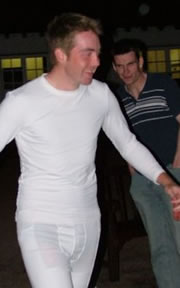 As a club we feel you are misinterpreting Dan's drinking needs. Instead of giving him 12 cans at the end of training you should, instead, place a bottle of Tequila in his hand. More than likely the bottle will be drunk by the time you're half way through your first can.

We discussed your request for 11 chicks to start your own team for next season at our latest committee meeting and feel that is a reasonable demand. However in return we would request 11 of your finest for our very own women's team in 2008. I hope we can come to an amicable agreement on this.

Thank you for your e-mail and please keep yourself and your club updated on both your players progress through this website. We hope to have many, many pics up there this year with more than a few taken after the action on the pitch has ended*.

* We will try to minimise the number of Dan wearing just padmans for child protection reasons.

Posted on Wednesday 2nd May 2007 by Fraser Murray

As many of you already know, we're training 3 nights a week (when midweek matches allow) from 6pm.

After practice on Wednesday and Thursday evenings the top bar will be open and food will be available around 8:15.

On the menu this week is pasta for £2.50 - there will be a different pasta each day.