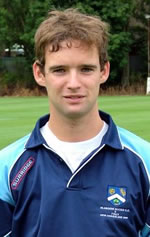 Richard Andrew - also known as Randy and Petulance to his team-mates - is a pinch-hitting opening batsman and a fine, medium-pace bowler.

He is capable of devastating the opposition with both leather and willow - taking wickets with his medium-pace out-swingers or hitting an elegant 50 in 35 balls in his own shot-a-ball style. His winter Down-Under in 2005 helped him to bat more consistently and lent more control and variety to his bowling.

In 2006, Randy blossomed into the cricketer everyone at Accies had always known he could be.  He led from the front with bat and ball, scoring 477 runs - including a glorious playoff century - and taking 25 wickets.  Without a doubt his high point with the ball was a devastating 6-23 against an EK side loaded with overseas talent to secure a low scoring game for his beloved Accies.  Perhaps more impressive than all of this was his thrilling century against the mighty Clyde Comets.

Randy further proved his pedigree by taking 17 wickets at a respectable 23.00 in Accies' difficult 2007 in the SNCL.

When asked which Accies cricketer, past or present, he would be if not himself, he responded without moment's pause: George Adams.  Randy doesn't seem to have trouble finding a girl in every port, so he's obviously envious of George's bucket hands - they'd certainly come in handy when Alfie Lloyd spoons him catches.

In the cold of winter, Randy studies law at the university of Strathclyde.  He has reportedly been a student for about the past 30 years and is on his 12th degree.  He also graces the hockey pitch for the Western 'Wildcats' and occasionally visits the toilets in the Buff Club, the Noodle Bar beside the Garage, the Casino on Sauchiehall St, and the bush at Charing Cross (in that order.)